Chris Sullivan has played at just about every groovy nightspot worth mentioning. He started playing Northern Soul at his youth club in 1974, then funk and dub at House parties from 76 on and repeated the selection at his Mayhem Studios Warehouse Parties from 78 till 1980.

In partnership with Rusty Egan and Steve Strange of Blitz fame he ran Hell and DJd all sorts (his signature tune being Contort Yourself by James Whits and The Blacks) founded the internationally successful Latin funk combo Blue Rondo a la Turk and went onto DJ his famously influential Wag Club that he founded and ran for 18 years. He’s done Le Kilt, St Moritz, Rouge, Jazz Cafe the Ministry, upstairs in Ronnie Scott’s, Café de Paris and every club and party worth talking about in London with gigs in Tokyo, New York, Los Angeles, Paris, Barcelona, Madrid, Vienna, Milan and Ibiza on countless occasions.

He has DJ’d at parties for amongst many others, George Michael, Jean Paul Gaultier, Paul Weller, Suggs , Madonna, Comme Des Garcons, Bianca Jagger, GQ and Italian Vogue and has had residencies at clubs such as Browns, Pacha, China White, MoMo and The Playboy. At present he has four residencies at Novikov, Balthazar, Laylow and Bodega de Negra in Soho and plays the Groucho bi-monthly.

He also often plays film premier parties and art openings in the city and takes DJ slots at Wayne Hemingway’s Classic Car Boot Fair, the Byline Festival, Houghton Festival, House of Fun for the band Madness, the Missoni opening party for Milan fashion week as well as the opening on the Venice Carnival and every September works the London Design Festival Closing Party at the V+A. This year he just made his debut on the Modcast all dayer in Brighton.

He admits to never knowing what he will play until he sees the crowd but is known for his knowledge of jazz, rare groove, dub, disco, soul and curious oddities and spends much of his time looking for rare re-issues and new music that fits his bill.

For Totally Wired he will be playing all of the above and more. 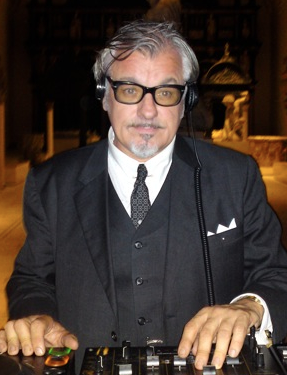