Red Rooster Festival is delighted to announce another virtual version of the festival after the socially distanced production was unable to go ahead in September. Following the success of the previous virtual festival in May, Red Rooster will do it again on 4-6 September but on a much bigger scale. The virtual festival will feature a bunch of Red Rooster stars playing live sessions and a 24-hour takeover of Totally Wired Radio with a stellar cast of DJs.

Red Rooster legend Nick Lowe will be joined by Cedric Burnside, Luther Dickinson from North Mississippi Allstars, Ian Siegal, Bob Log, Marcus Bonfanto, Little Barrie and lots more. The format will be the same as the May virtual event: each artist will play 2-3 songs with an exclusive live video which will be dropped on the Red Rooster socials on Friday 4- Saturday 5 September.

The DJ bill booked for September was the strongest to date and organisers are super excited to replicate it for the 24-hour Red Rooster takeover of Totally Wired Radio. David Holmes will headline, playing a tribute to his friend and very sadly missed Andrew Weatherall. Jonathan More from Cold Cut/Ninja Tune returns with new additions Eddie Piller from Acid Jazz and club legenda Rocky and Ross Allen. The takeover kicks off at midday Saturday 5 September and goes on until midday Sunday 6th. 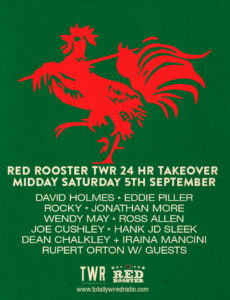